The US and the UK have now provided at least some vaccination protection to more than a third of the population. And while the level of vaccination protection in Europe is still low, it has begun to accelerate; it is reasonable to assume that along with the US and the UK, most of the European population will be fully vaccinated by late summer. In anticipation of a vaccine-led, fiscal spending supported economic recovery, equity markets have risen strongly from the lows last year, led by the materials sector which has risen 72% in the twelve months to the 31st of March. As we tentatively emerge into the next, more hopeful, stage of the pandemic, market enthusiasm, COVID-induced supply chain disruption, fragile global trading systems and rising US bond yields have begun to focus investors on the outlook for and implications of any rise in inflation on economies, real returns and monetary policy.

Commodity Prices Have Rebounded And Money Supply Has Exploded

Commodity prices, especially oil, were at depressed levels twelve months ago as the reality of the pandemic hit. The rolling year-on-year inflation numbers are therefore likely to show a sharp pickup over the next few months.

Inflation may also be buoyed in the coming months by some pandemic induced opportunism as businesses capitalize on supply chain disruption in an economic recovery.

There is also concern amongst some investors that thirteen years of post-GFC ultra-loose monetary policy compounded by a post-COVID savings spending spree and the very substantial fiscal response to the pandemic will result in higher inflation expectations and a steeper future inflation trajectory. Some of these worries are generated by the chart below. It shows US money supply driven sharply higher by the pandemic stimulus programs. The more recent announcements of the new $1.9 trillion US federal stimulus program as well as current negotiations over a $2 trillion infrastructure program ensure the US continues to run some of the largest budget deficits in the developed world. This chart will likely reach further extremes and continue to inflame the debate.

In the current environment, data points are extremely difficult to interpret. Charts like the one above scare people who fear inflation, especially those who grew up in the 1960’s and 1970’s. They argue that secular forces such as globalization and the rise of China have suppressed latent inflationary forces over the past twenty years, especially post-GFC, and now these forces are in reverse. By the time this becomes clear, central banks desperate to keep economies and financial markets afloat will be behind the curve.

But Disinflationary Forces Have Not Disappeared

In counter, others, and not just supporters of Modern Monetary Theory (MMT), point out that broad money supply has had no correlation with inflation since the 1970s, and that there are several reasons why the link may remain weak. They point out that the velocity of money is extremely unstable in practice, and velocity may be low in the future as cash as a strategic holding becomes more prevalent. In addition, money is used for the purchase of assets as well as consumer goods and services, so a rise in broad money supply may have buoyed assets prices, such as housing, which do not feature within CPI baskets.

Because of the pandemic, the output gap, while difficult to estimate given the disruption, is believed to be at least 2.5% of GDP in most developed economies. Supporters of the more benign inflation view believe excess capacity from the residual output gap should result in a normalization of money supply, prices and inflation. Moreover, from a global perspective, while the attention on the US fiscal stimulus is unsurprisingly high, China has begun to pare back its stimulus, while economic support in Europe and in emerging countries remains much lower.

While anticipating some pick up from the lows of last year, markets and models are still relatively sanguine about the near-term inflation outlook. The most straightforward indicator of market expectations of future inflation rates, breakeven rates on inflation linked US Treasuries, are still pricing in relatively benign expectations. While the expected inflation rate has risen sharply since the low last year, it is still anticipating an annualized inflation rate of 2.5% over the next 5 years, decelerating to a lower rate for the following five years.

The Mondrian inflation models managed by our Fixed Income and Currency team are also indicating no material change in inflation forecasts for the next couple of years. This is not surprising. Among the key inputs, oil prices have only returned to where they were a year ago and while other commodity prices have risen, the index is only back at Q4 2018 levels. While unexpected inflation is a great destroyer of wealth, structural changes in inflation levels are actually relatively infrequent because policy makers usually have tools to confront unwanted inflation. In most environments, the strongest predictor of future near-term inflation is therefore recent inflation experience. Typically, near-term quantitative inflation models heavily weight recent inflation experience because inflation itself is a lagging indicator as it takes time for excesses to build in the economy and for the impact of commodity prices to flow through the economy.

Can Or Would Central Banks React?

Equally, it is unclear what the central bank reaction would be to a rise in inflation and is likely to depend on the nature of that inflation. In the short-term, we know from statements by Jay Powell and other central bankers that their focus remains on supporting the economy, and that they would welcome a rise in inflation through their target (the Fed) of 2.0%. A post-pandemic economic recovery with a 2.5% inflation trajectory would be as close to perfection as we can imagine right now. Economies could recover without the destabilization high inflation or deflation would bring. Companies would have some pricing flexibility to lubricate their operations. Long-term interest rates could begin an orderly process of normalizing towards 4%; systemic risk would fall away pretty quickly.

In the early stages of this dream scenario, it is unclear what would embed a sustained higher level of inflationary expectations within economies. An extended period of low inflation has meant that today’s economies in Europe, the US and Japan are less exposed to automatic inflation pass through than previously, and central bankers have not lost the tools or the ability to control inflation. Rather, it is more likely that those in the market who anticipate inflation have doubts that central bankers and policy makers will have the will, rather than the tools, to challenge inflation as and when it develops. This highlights the current conundrum and challenge at the heart of economic and financial policy as well as investment markets.

Near-term inflation looks manageable and even welcome, but given the volatility of the economic data and the uncertain response from markets and central banks, longer-term we have as many views as the market on the likely inflation trajectory. Our challenge is to use this uncertainty to build robust portfolios with sufficient underlying value and confidence intervals to offer attractive potential real returns in a variety of different economic and inflationary environments.

The pandemic has revealed both the resilience and the vulnerabilities of companies, people and economies. Despite the challenge and the trauma of the pandemic, developed economies have fared relatively well so far. Short-term economic assumptions are being upgraded, and markets have rallied strongly. Higher asset prices mean that markets and policy makers are now even more trapped between the loose monetary policy and low interest rates which are supporting high asset prices, and the risks, whether to inflation, bubbles or prices, of a normalization of monetary policy however tentative.

While market strength and the relative resilience of economies are encouraging, recent fiscal policy announcements in the US and in other developed economies highlight the significant uncertainty that continues to govern the pandemic response. They also demonstrate the inherent weaknesses of the current position. Governments, especially in the US, have become a much larger share of the economy: the fiscal deficits are now running at 10-15% of GDP in the US. Moreover, while all new plans need to work their way through Congress, the scale of the current administration’s fiscal policies, with plans for public borrowing and spending not seen since the second world war, have widened the range of outcomes across the market. Meanwhile the zombification of significant sections of the private sector has left these businesses with a difficult future. While developed markets have had an unexpectedly good pandemic in economic terms thanks to prompt actions by economic policy makers, we are now surveying a position where, since the global financial crisis, asset prices have risen ever higher despite the increasing systemic risk within these economies.

Mondrian’s focus on achieving relatively stable, long-term real returns means we invest our portfolios based on our assessment of the misvaluation of a company’s ability to generate free cash flow and its willingness to return it to investors. We couple that fundamental cash-flow based analysis with an assessment of the range of outcomes between best and worst case scenarios. While our valuation discipline has been a challenging investment approach to follow in recent years, over the long-term, this focus on intrinsic value generation should be less dependent on market-level valuations, achieve more stable absolute returns, and be much less sensitive to changes in discount rates and economic conditions. This should support a positive skew of returns when asset prices are high, economic uncertainty is significant, and policy makers look to wean markets off public support.

This material is for informational purposes only and is not an offer or solicitation with respect to any securities. Any offer of securities can only be made by written offering materials, which are available solely upon request, on an exclusively private basis and only to qualified financially sophisticated investors.

The information was obtained from sources we believe to be reliable, but its accuracy is not guaranteed and it may be incomplete or condensed. It should not be assumed that investments made in the future will be profitable or will equal the performance of any security referenced in this paper. Past performance is not a guarantee of future results. An investment involves the risk of loss. The investment return and value of investments will fluctuate. 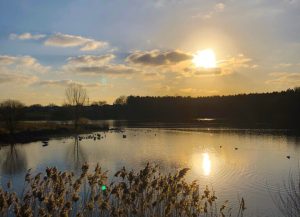