A Case Study for Bottom-up Analysis

At Mondrian, while we are not activist investors in the traditional understanding of the word, in order to protect and advance the interests of our clients, we do engage with management or at board level as appropriate. This long-term, considered approach is often complementary to that of company management. Our recent interactions with Fujifilm1, a new position in the Mondrian International Equity Fund, are a good illustration of our approach.

After thorough analysis, Mondrian initiated a position in Fujifilm, the Japanese diversified imaging company, in 2017

Founded primarily as a photographic film maker, over time Fujifilm has successfully evolved the business into a number of related areas, building on its accrued expertise in films and chemicals. Today it is a diversified imaging company with a significant presence in LCD and semiconductor materials, office equipment, healthcare and photography.

We have followed the company for many years and have considered it for investment on several occasions. In the past, however, we have ruled out an investment because of concerns that the skew of outcomes was more weighted towards an unattractive worst-case scenario given high dependence on businesses that we believed were over-earning on a long-term outlook. In particular, in the early 2010s we felt that the group was too reliant on the TAC film2 business which we thought faced a more challenging environment looking forward. We also had concerns over the company’s somewhat ambivalent attitude to shareholder returns.

Since then, the profitability of TAC film has fallen significantly, as anticipated, but the company has successfully evolved into a diversified portfolio of businesses with a more balanced profit base which is no longer heavily reliant on one business area with high downside risk. Cash cow businesses, including office equipment and TAC film, are complemented by growing areas such as medical equipment, semiconductor production materials, instant cameras and pharmaceuticals. The ‘razor and blades’ offering in office equipment, where over 50% of sales and a higher share of profits from consumables, helps to support good cash generation. This cash can be reinvested into the growing businesses and can also contribute to increasing shareholder returns. In the longer term we believe the healthcare- related businesses (medical equipment and pharmaceuticals) will contribute a higher share of profit, with Japan’s ageing demographics supporting demand, and profit rising from a low base in the pharmaceuticals business following heavy investment in recent years.

From the early 2010s the company has also continued to strengthen its balance sheet, such that by 2017 we believed that the company’s overcapitalized net-cash balance sheet presented an attractive opportunity, further improving the skew of returns: be that through increasing payouts to shareholders, value accretive acquisitions or downside protection in weaker environments. We felt that the company had significant scope to increase shareholder returns given its strong net-cash balance sheet, very good free cash flow generation and low payout ratio (as illustrated in Chart 2, free cash flow has significantly exceeded shareholder returns in recent years). This was further supported by the broader push in Japan, led by the Abe administration, to improve corporate governance, including an increased focus on ROE and shareholder returns. This was another material change since our previous assessment which contributed to an increased forecast of higher long-term expected returns.

As a result of our thorough bottom-up analysis and incorporating all of these factors into our long-term dividend discount valuation, we concluded the stock was significantly undervalued with an attractive skew of returns and a reasonable worst case scenario. We therefore decided to initiate a position.

Around the time of our decision to invest, the company disclosed certain accounting issues related to inappropriate revenue recognition in the Fuji-Xerox joint venture in Australia and New Zealand. We then held numerous conversations with the company, including with the president, regarding corporate governance. While the resulting share price decline provided us with an attractive entry point at a time when many other technology company valuations globally were becoming stretched, we engaged with the company in detail before building the position to ensure that we had confidence that it was making significant governance and oversight improvements to avoid similar issues in future.

Since our initial investment, and more quickly than we anticipated, the company has announced a large increase to shareholder returns resulting in an implied 4.5% TSR (total shareholder return) p.a. throughout the next three year medium-term plan period, which will involve returning a total of c.$3bn to shareholders. 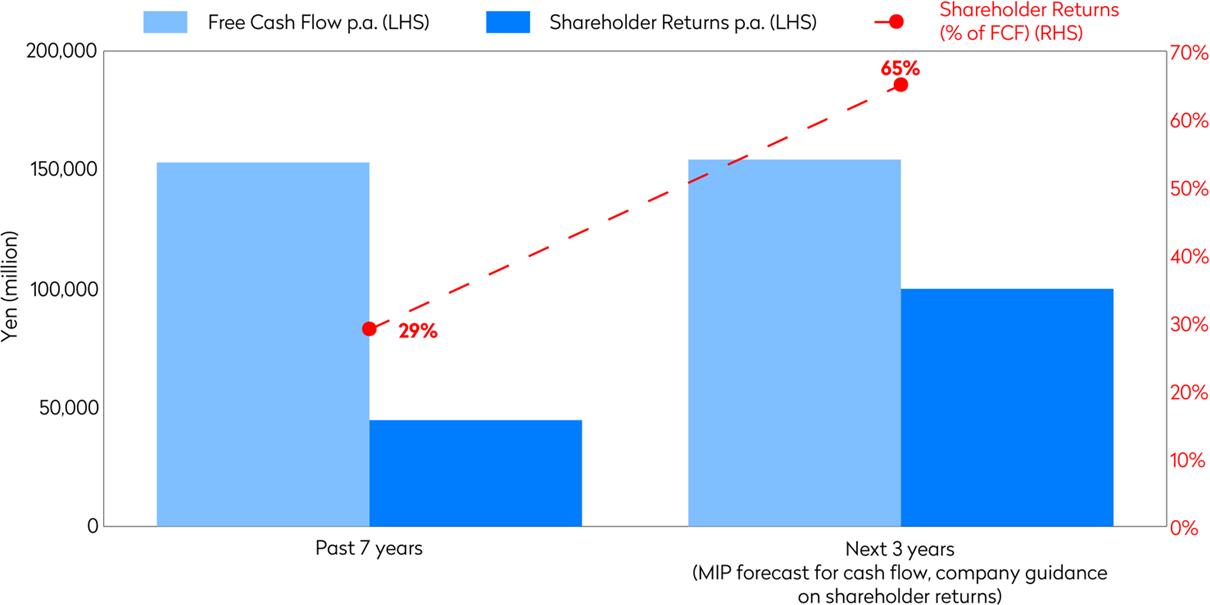 Q1 2018 Fujifilm announced its intention to combine with Xerox; Mondrian actively engaged with the company to try and ensure the best deal for Fujifilm shareholders

In January 2018, rumors began to surface that Fujifilm might be planning an acquisition of US-listed Xerox Corp. The two companies have a close working relationship via their long-standing joint venture Fuji-Xerox. At this point, before any deal was announced, we contacted the Fujifilm board highlighting the importance of making any decisions only in the best interests of Fujifilm’s current shareholders and stressing the value of a strong balance sheet, which was an important factor in our assessment of the company.

The company subsequently announced its plan to combine with Xerox using a somewhat complex structure, which helped to reduce the cash outflow from Fujifilm. The Fujifilm share price initially fell when the deal was announced but subsequently recovered when further information was released to the market clarifying that this would not be an all- cash takeover as feared and highlighting the extent of the synergies expected (cost synergies of c.$1.7bn p.a. expected by 2022). The company highlighted that this structure was put in place taking into account the views of its shareholders, noting in particular that existing shareholders would not be happy with a full cash buyout.

Following the announcement, short-term activist investors in Xerox, including Carl Icahn and Darwin Deason, immediately started agitating for an even better deal for Xerox shareholders, despite the fact that as part of the transaction they would receive a large special dividend, only possible because of the strength of Fujifilm’s balance sheet. We immediately spoke to Fujifilm and arranged a meeting in Tokyo with a board member. At this meeting we provided supporting evidence to the board as to why we believed the transaction was already a more than fair deal for Xerox shareholders, helping to reinforce their position. We believe this conversation should help to reduce the risk that Fujifilm are swayed into offering anything more to Xerox shareholders beyond what are already generous combination terms. The company thanked us for our support and for the calculations provided. As a result of this positive discussion and taking into account the balance of risk and return, we felt comfortable adding further to the position in Fujifilm.

With well-advised and savvy activists eyeing the hard-earned cash on Fujifilm’s balance sheet, it is important that Fujifilm can point to the views of its own shareholder base in its negotiations with Xerox and Xerox shareholders. We believe this is something only an active manager with a long-term approach, a focused portfolio and a detailed understanding of the implications of this complex deal could, or indeed would want to, provide.

Regular meetings with current and prospective holdings remain a vital part of the Mondrian investment process, both to more fully understand the strategy of the companies in which we invest, and where necessary to engage in detailed and informed discussions on strategic or governance related issues. We continue to believe that appropriate engagement and discussions between portfolio companies and those long-term shareholders with a detailed knowledge of the company’s businesses, management and board can support portfolio returns, and further, can add value beyond the initial identification of mispriced securities, which remains the core of our value-oriented investment approach.

Mondrian, founded in 1990, managed more than $60 billion (US) in assets, including over $17 billion in international equity assets as of March 31, 2018.  We have a diverse, global client base, investing for corporations, public and private pension plans, endowments, foundations, and individual investors in a broad range of strategies and vehicles.

[2] TAC film is a protective film layer used in polarizers within LCD panels. Fujifilm is the global market leader.

For more information on why international value stocks should be apart of your client’s portfolio allocation, please contact the following:

Reading Time: 6 minutes While the year’s weakness had initially been concentrated among the most speculative assets – including meme stocks, cryptocurrencies and special purpose acquisition vehicles – this sell-off became more broad-based in the second quarter.