It is amazing to think that a year ago our Q1 2020 report hypothesized about the dramatic impact one might expect as a result of COVID-19. We explained then that we thought the fall out would be devastating with long term repercussions for the global economy, but little did we know that we would still be in some form of lockdown 12 months on. It is also fair to say that while we thought many stocks were very oversold, we would have jumped at the opportunity to take a c.60% return from that point to now given the extreme uncertainty at that time. That being the case, the last 12 months have highlighted once again how important a clear and consistent long term valuation discipline is, as discussed in our year end commentary. In fact the last 12 months in many ways have been a microcosm of so much that is good and bad about emerging market (EM) Equity investing, with the first quarter of the year bringing many to prominence once again. Let’s reflect on each in turn.

The Persistent Fragility of Investing in SOEs, and Certain EMEA and LatAm Jurisdictions

We have written before regarding our preference for investments in Asia over LatAm and EMEA, and how particular selectivity is required in these regions. Countries such as South Africa, Russia, Turkey, Brazil and Argentina exhibit fragilities in their political systems and economies that need to be understood and guarded against. In the first quarter of this year, these concerns came to the fore in Brazil and Turkey in particular. The Turkish Prime Minister Recep Erdogan unexpectedly fired the credible Central Bank head, once again exposing Erdogan’s highly unorthodox approach to monetary policy and Turkey’s perilous financial position. A few days later he then fired the deputy head too.

In Brazil, President Bolsanaro sacked the CEO of state run oil producer Petrobras following weeks of clashes over fuel price hikes. The intervention in one of Brazil’s most valuable companies along with a vow to reduce prices in the power sector too, cast growing concern on the government’s commitment to free markets. Both situations unnerved financial markets, and as is so often the way, manifested itself in a sharp sell-off in their currencies. The Turkish Lira and Brazilian real were the two weakest EM currencies in Q1 falling 10% & 8% respectively. Both episodes once again emphasized the challenges of investing in large parts of EMEA and Latin America given the regular preponderance of sharp FX losses that significantly erode US dollar returns. The Petrobras affair also reminds all investors to go into SOEs with their eyes wide open. In a quarter when Oil prices rallied 24%, Petrobras stock fell 22% – a startling divergence.

China – Keep on the Right Side of the Government

Returns from China over the last 10 years have only been surpassed by those from Taiwan. Investors who were overly skeptical of the Chinese juggernaut and heavily underweighted the market on lack of trust in data and transparency, or certain ESG principles would have missed out on some of the best performing companies in the asset class over the last 10 years. The outstanding returns have been dominated in burgeoning technology related companies; businesses that have transformed the way Chinese consumers and businesses operate and behave today compared to ten years ago. While this is mostly a positive story of innovation, entrepreneurialism and excellent cash flows and profits, the better the story has become, the more certain companies put themselves in the headlights of Chinese authorities. Last year Alibaba got a clear rap on the knuckles after Jack Ma spoke out against the Chinese financial system, and this year the threat of broader regulation has raised concerns on the future profit growth for many of China’s best known and largest technology companies such as Tencent, Meituan and Pinduoduo. It is clear that the government will not allow these companies to become too dominant in areas they want to retain control over, particularly the financial system. It is highly likely therefore that fintech operators may have to adapt their business models which could impact future growth expectations. Furthermore, it looks increasingly likely there will be regulation around data protection with rumors of a JV being formed with an SOE to monitor data and anti-trust on platforms.

Separately, the end of the President Trump era, one characterized by many things, but especially a deep disdain for China, does not necessarily spell the end of difficulties for US listed Chinese stocks. News came out during the quarter of the SEC’s planned implementation of the requirements of the Holding Foreign Companies Accountable Act. The most important takeaway from this seems to be the continued support that President Biden’s administration is providing to the SEC to persist with the pressure being placed on China issuers to comply with auditing oversight of listed ADRs from within the US. While the SEC was expected to start implementing the new law, this announcement signals that Biden-era financial regulators will continue their predecessors’ tough stance on China. The conclusion is clear, while China has been a great source of returns over the last ten years; regulatory pressure is increasing, at home and abroad. We as investors can never be complacent, particularly in the asset class’s largest market.

Commodities Remain an Area of Comparative Advantage within some Emerging Markets, but Beware of Cyclicality

We wrote last year how EM is a more attractive asset class today given the dominance of world leading technology companies. Once upon a time, it was commodity stocks that were the greater driver. While the weight of energy and materials shrunk to 12.5% at the start of the year, the rally in commodity prices has been positive for EM and reminded investors that we have some of the world’s leading metals and mining, pulp, and energy companies. We would caution however, that the cyclicality of the sector hasn’t changed. Hence while the immediate outlook looks positive for many of the above, history tells us that supernormal profits are most likely unsustainable.

EM Tech at the Forefront of Global Economic Development and Growth

The quarter confirmed our previous message regarding EM companies’ relevance and importance in the global tech supply chain. A global semiconductor shortage has upended the supply of everyday devices from smartphones to gaming consoles to tech dependent cars, with many automakers in particular warning of suspended production lines due to lack of chip supply. EM is the home to global leaders such as TSMC and Samsung in the chip space, and across the technology ecosystem, EM companies have become increasingly essential. This is particularly so in the Electric Vehicle battery space with global autos dependent on Chinese and Korean producers such as CATL and LG Chemical. The significance of this rise in importance of EM companies to global supply chains, especially in the semiconductor space has created national security risk concerns within the US government, and has led to measures being introduced which seek to encourage local production. Intel announced during the quarter that it will spend over $20Bn to expand its chip manufacturing facilities. While this brings competition to EM companies, we view the Asian supply chain’s prominence as a key competitive advantage and enduring strength for EM investing, something that the Intel announcement only confirms.

Considering all the above, especially the rollercoaster ride of EM equities over the last 12 months, we take great heart in the discipline and consistency with which we employ our valuation process. For all of the above, the good and the bad, it is our job to assess the most likely consequences and put a price on each event. From there we look at the range of outcomes to ascertain how attractive the skew is at the respective share price.

While we are highly skeptical of Brazilian opportunities and came into 2021 underweight the market, the sharp sell-off gave us a margin of safety to which we felt it appropriate to add to two of our three existing investments. In Turkey’s case however, while Erdogan is in power, or the ugly face of EM, we believe risks are too great and hence we remain out of that market. We reduced Chinese technology companies such as Tencent, Baidu, Hikvision and Longi despite all the positive aspects to their investment case, we felt it prudent to take some profits and manage exposures here given increased risks and higher prices.

Most importantly, a year ago, when pessimism was high and stock prices low, our long term valuation process allowed us to look through the short term pain and pick up stocks at extremely attractive risk adjusted levels. As we sit today, post a c.60% one year return, the EM asset class valuation is more balanced than a year ago. Nevertheless, clients can rest assured that we will remain disciplined in the prices we pay for stocks, neither getting too exuberant when things look good, or overly negative when they turn bad, although staying away when downright ugly. After over 25 years managing EM Equity portfolios, we know to keep a pragmatic outlook and defer to our tried and tested valuation methodology.

This material is for informational purposes only and is not an offer or solicitation with respect to any securities. Any offer of securities can only be made by written offering materials, which are available solely upon request, on an exclusively private basis and only to qualified financially sophisticated investors.

The information was obtained from sources we believe to be reliable, but its accuracy is not guaranteed and it may be incomplete or condensed. It should not be assumed that investments made in the future will be profitable or will equal the performance of any security referenced in this paper. Past performance is not a guarantee of future results. An investment involves the risk of loss. The investment return and value of investments will fluctuate. 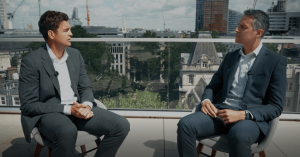 Video: The Case for Global Bonds

The semiconductor shortage has highlighted the ever growing importance of the sector to the global economy.

Equity markets have rebounded sharply in the last year, with the MSCI World index now 32% — above where it was pre-COVID-19.