2022 was a challenging year for the global economy and stock markets. The desperately sad war in Ukraine caused havoc on global commodity markets, further pressurizing inflation that was already on the rise. Global interest rates were pushed up to try stifle price increases not seen for decades. Furthermore, China continued to adopt a zero-covid policy hampering supply chains and stunting domestic growth in the world’s second largest economy; while geo-political fears rose in light of Russia’s actions and China’s rather delicate relationship with the US and Taiwan. The MSCI Emerging Markets Index fell 20% (all returns in USD), underperforming developed markets primarily due to the impact of China’s 22% fall, and Russia’s effective mark down to zero. Nevertheless, there were several positive markets in the asset class, and the year ended with glimmers of hope for a much better 2023. Aided by value outperforming growth, Mondrian’s defensively positioned emerging markets strategy delivered outperformance against the broad benchmark and the value index.

Outside of the Russian war with Ukraine, China remained the country with the most impactful news flow in 2022. They maintained a zero-Covid policy until year end, and the party congress in October made no statements indicating a change of that path despite widespread expectation. In fact, markets were initially spooked by President Xi’s politburo appointments, and any hopes of the congress proving a turning point for the market were initially dashed. At the end of October, the China market bottomed and was down 43% for the year at that point. During the year we wrote and spoke of how we felt China was possibly the cheapest market globally given its steep falls and relative underperformance. Despite market perceptions of risk and questions such as ‘is China even investable’, we increased our overweight position as the market fell. Our years of experience investing in emerging markets regularly demonstrate that the greatest opportunities often arise when market participants are most fearful. As the year ended, it looked like this was beginning to prove valid in China. The market rose 36% from the October low to year end, helped by a shift in China’s Covid policy.

China still ended the year down 22%, slightly underperforming EM ex-China, but despite our overweight position, we added significant value from stock selection meaning that overall, approximately 400 bps of the year’s outperformance came from our value oriented defensive positioning in China. Notable stocks that outperformed and added value were pharmaceutical CSPC, insurer Ping An (-4%), online auto portal Autohome and Yum China. The stock that weighed the most on relative performance was home appliance manufacturer Midea, given the link between its business and the ailing property sector.

Our positioning in China is driven by risk-adjusted valuations. At the depth of the market, China was exceptionally cheap. We believe it remains very undervalued today. Nevertheless, we took significant profits from outperformers like those above, and somewhat curtailed our overweight by year end to approximately 5%. We expect the market to continue to recover as China more meaningfully comes out of lock down and investors reassess their positioning. We are highly cognizant of the various risks of investing in China and hence will remain disciplined in our value approach. As and when those risk adjusted returns do not look so attractive, we will continue to reduce our position. 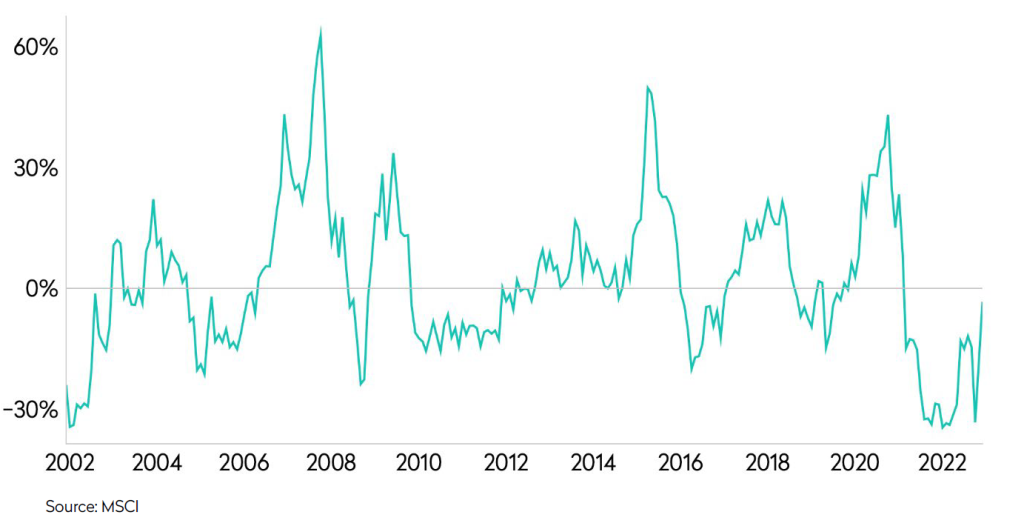 Elsewhere in Asia, India outperformed although still fell 8%. The Indian domestic growth story remained intact, and the market was seen as something of a safe haven in a world with so many troublesome areas last year. This elevated valuations to levels that we believe to be expensive. Our underweight of approximately 5% therefore cost the portfolio c.70 bps. We too believe in the positive long-term structural dynamics for India, but as value investors we struggle to find stocks that don’t price this in already. We remain underweight into 2023.

We see better value in Korea. The stock market and the currency both fell heavily in 2022 leaving the market down 29%. As with China, our stock selection helped us add value despite an overweight position. Holdings in EV battery manufacturer LG Chem, and financial stocks Shinhan and Samsung Fire & Marine all benefited performance. This was somewhat offset by memory names Samsung Electronics and SK Hynix which fell heavily given concerns for global IT demand. We added to the sector during the year, as whilst the demand correction is proving more severe than prior expectations we believe this does not materially alter the attractive long term outlook for memory semiconductors. Further, as exporters, both companies see improved competitiveness from the significant depreciation in the Korean won which occurred last year. At its low point in mid-October, we estimated the Korean won to be approximately 4 standard deviations undervalued against the US dollar, a strong signal of deep undervaluation. We ended the year roughly 4% overweight, and by year end, the won had recovered over 10%.\

Performance of EMEA was overshadowed by events in Russia, where stocks were marked down to zero. We were slightly underweight Russia before the war and while it cost around 300bps in absolute performance, on a relative basis we gained a small amount. The Middle East was a beneficiary of the war’s impact on energy prices. Saudi Arabia, the largest of the GCC markets fell just 5%, similar to Qatar and the UAE, while Kuwait rose 10%. We had zero exposure to the middle east given expensive risk adjusted valuations, especially when combined with the ESG related issues we observe there. In total, this underweight cost us over 100bps. We still own nothing there and would expect the region to underperform as energy prices adjust to more normalized levels.

Latin America was another beneficiary of rising commodity prices, especially Brazil and Peru where we have overweight positions. Brazil was the best performing large emerging market (+14%), helped by an appreciating currency, the real. Investors were drawn to Brazil given its strong link to a broad range of commodities, while the Central Bank were ahead of the curve in raising rates. Healthcare stock, Hypera, was the portfolio’s best performer and helped add almost 150bps to performance.
Holdings in iron ore miner Vale, pulp producer Suzano and bank Itau all added value. In Q4, Luiz Inacio Lula de Silva was elected President, replacing Jair Bolsonaro. Lula campaigned on more left-wing policies causing jitters in the market. Brazilian stocks though do look attractively valued and we remain around 3% overweight. Nevertheless, we will be watching Lula’s early policy signals very closely. There is a risk he meddles in corporate Brazil, especially Petrobras, and proposes a big (and unfunded) spending campaign which could be of detriment to Brazil’s finances, leading to a weaker real. We have ensured our stocks are well balanced towards natural FX hedges, such that if the real does weaken, investments there should be somewhat protected. In Peru, our holding in leading bank Credicorp recovered after a disappointing 2021, helping add c.100 bps to performance.

We are positive on the outlook for EM in 2023. Three of the four largest markets in MSCI EM – China, Korea and Taiwan – fell 20-30% last year. We think all three are extremely undervalued today; they total almost 60% of the index and approximately two thirds of Mondrian’s portfolio. If China continues to support opening up policies post zero-Covid while also stimulating the economy; and the country returns to a more ‘normal’ status throughout the year, that will benefit both the domestic and regional Asian economies. Following a weak year for all three markets and with somewhat depressed valuations, we think a reasonable level of recovery is eminently possible. The remaining third of the portfolio is invested across selective and well diversified areas by geography and sector. With persistently high inflation making it difficult for interest rates to fall any time soon, we expect economic growth to be under pressure and the value style to continue to perform well also helping our portfolio positioning. We end the year with the portfolio exhibiting both value and quality metrics trading on a PE of c10x, a trailing dividend yield of c.4.5% and an ROE of over 18%. We look forward to 2023 therefore with optimism and hopefully a continuation of improved performance.

Past performance is not a guarantee of future results. An investment involves the risk of loss. The investment return and value of investments will fluctuate.

For investment professionals only.

Information and data is correct as at 31 December 2022. Neither MSCI nor any other party involved in or related to compiling, computing or creating the MSCI data makes any express or implied warranties or representations with respect to such data (or the results to be obtained by the use thereof), and all such parties hereby expressly disclaim all warranties of originality, accuracy, completeness, merchantability or fitness for a particular purpose with respect to any of such data.
Without limiting any of the foregoing, in no event shall MSCI, any of its affiliates or any third party involved in or related to compiling, computing or creating the data have any liability for any direct, indirect, special, punitive, consequential or any other damages (including lost profits) even if notified of the possibility of such damages. No further distribution or dissemination of the MSCI data is permitted without MSCI’s express written consent.

All information is subject to change without notice. Views should not be considered a recommendation to buy, hold or sell any investment and should not be relied on as research or advice.

This material is for informational purposes only and is not an offer or solicitation with respect to any securities. Any offer of securities can only be made by written offering materials, which are available solely upon request, on an exclusively private basis and only to qualified financially sophisticated investors. The information was obtained from sources we believe to be reliable, but its accuracy is not guaranteed, and it may be incomplete or condensed. It should not be assumed that investments made in the future will be profitable or will equal the performance of any security referenced in this paper.

Reading Time: 6 minutes After a challenging few years, Russia’s invasion of Ukraine in February made it clear that 2022 would not mark a return to the low interest rate and low volatility, post-GFC paradigm.

Reading Time: 6 minutes Against a difficult backdrop, there was no place to hide in public investment markets in 2022. Inflation and interest rates were on the rise and large blow-ups such as Credit Suisse, Tesla, FTX and the broader crypto-sphere dominated headlines.

A Global Perspective: Mondrian’s approach to identifying value in the US

Reading Time: 3 minutes When building a portfolio of US Large Cap companies, it is critical to have a global perspective. Over 30% of the revenue for the Fortune 100 is derived from outside the US. Additionally, many US multinational companies’ largest direct competitors are based in a different country.

©2023 Mondrian Investment Partners Limited is authorized and regulated by the Financial Conduct Authority – Firm Reference Number 149507.
All information is as of December 31, 2022 unless otherwise noted.