In what is turning out to be a challenging year for global stock market returns, the performance of India stands out within the emerging market asset class and global stock markets. In the nine months through the end of September, MSCI India has fallen by 9.7%, compared to the Emerging Markets index that is down 27.2%. Within Asia, only Indonesia and Thailand have performed better than India this year. This builds on a base of very strong long term returns, with India having outpaced the EM index over most time frames (see table). The result has been that the weighting of India within the MSCI Emerging Markets index has increased further, reaching an all-time high of 15.3% by the end of the third quarter. As a result, India’s weighting has eclipsed both Taiwan and Korea, becoming second only in size now to China. 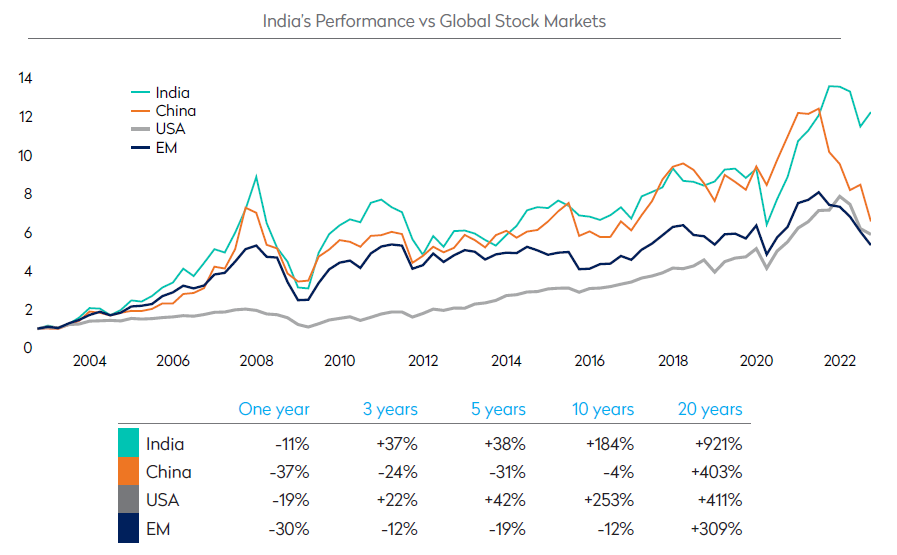 Mondrian has long been heavily invested in India and we were overweight as recently as July 2021. We continue to believe that India has many attractive features for long-term investors. However, we have reduced exposure in absolute terms, even as the index weighting has been moving upwards. Today, India represents an underweight position in our Emerging Markets strategy. Before we explain this underweight, it is important to dwell on the many attractive qualities India offers investors.

India has many structural attractions for long-term investors; any discussion of these usually begins by mentioning the country’s excellent demographics, which are notable. India’s population is large (now estimated to exceed 1.4 billion people), growing (at 0.7% per annum) and relatively young, with a median age of approximately 29 years old; this sets the country apart from all others.

Secondly, the country continues to be relatively under-developed. India’s GDP per capita is approximately $2200, about 20% of China’s level. India’s status as a very large, developing country clearly creates strong latent potential for future growth, adding to the impression of inevitability over India’s rise. However, while the country’s long-term economic performance has been good, India’s past development has been punctuated by periodic set-backs and policy mis-steps that have exposed long-standing structural weaknesses and prevented the country from realizing its full growth potential.

Efforts to address these weaknesses and improve economic performance have become more apparent under the leadership of Prime Minister Narendra Modi, who took office in 2014 and is now in his second term. Modi’s government has pursued several structural reforms which we believe have been broadly positive for India’s economy and the resilience of its institutions and finances. While this approach has been multi-faceted, some common themes of Modi’s reform agenda have been harnessing the power of the private sector to drive investment, embracing the use of technology and enabling greater participation in the formal economy. One important result has been the clean-up of bad debt issues in the banking sector, setting the scene for greater ability to fund investment in capex and consumption. Meanwhile, the growing availability of cheap, high-speed telecom services combined with a government-provided universal identity system and free digital payments backbone have created a platform for the development of the digital economy. Looking ahead, other government policies are aimed at encouraging the development of the housing sector and domestic manufacturing, both of which can be engines of growth.

Like many other investors, we believe that India’s economy should continue to benefit from these characteristics and reforms, and is capable of sustaining strong growth in the years ahead. This should be particularly true if the country can continue to demonstrate political stability. With strong approval ratings and weak opposition, Modi currently appears on course to win re-election in 2024. Such political continuity would likely both support the ongoing growth of the economy and be welcomed by investors.

While appreciation of India’s unique long-term potential and greater political stability was already widespread, perceptions of India have likely benefited further from its relatively strong short-term economic performance. The economy has recovered fully from Covid disruption and inflation has remained relatively benign. This has enabled corporate earnings to recover and surpass pre-Covid levels. India has also kept its distance from geopolitical tensions between the US and China, and over Russia, adding to the impression of relative resilience in an uncertain world.

Recognition of India’s attributes and outlook has helped the stock market to maintain high levels of valuation. The Indian market has tended to trade at a meaningful premium to other emerging markets but over the last 18 months, the valuation divergence between India and most other markets has reached more extreme levels (see chart). The MSCI India index now trades above a 100% premium to the Emerging Market index. Although much of that comparison can be attributed to the de-rating of the Chinese equity market, India even trades at a 29% premium to MSCI USA. India has the highest P/E, P/B and P/CF multiples of any market within the Emerging Markets index, as well as having the lowest dividend yield. The market multiple also looks somewhat rich relative to India’s own historical trading range. 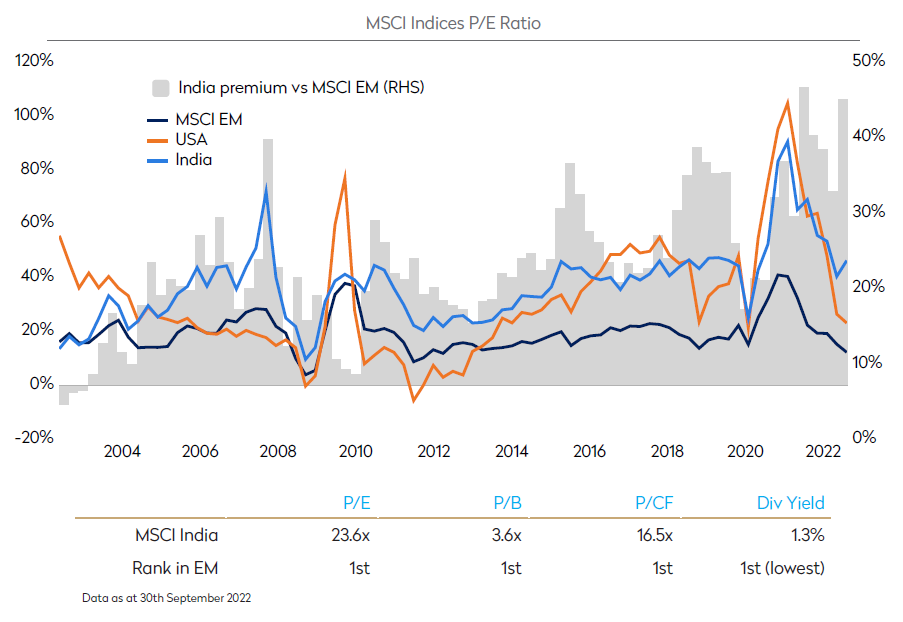 As always, pockets of undervaluation remain but these have become increasingly scarce. However we look at it, valuations in the Indian market as a whole appear high in absolute and relative terms. We have accordingly moved to contain our exposure, maintaining an underweight to the market as a whole. We are not alone in adopting this positioning; foreign investors have withdrawn a net $30b from the Indian market over the past 18 months according to data from Jeffries. Anecdotally, elevated valuations are most frequently cited as the rationale for underweight exposure to India.

If foreign investors have been voting with their feet, how then can we explain the relatively robust performance of the stock market in the year to date? Much of the answer seems to lie with rising inflows from domestic investors, which have entirely offset the outflows from foreign investors. Domestic equity mutual funds inflows were $33b in the year ended March 2022 and almost $12b for the June quarter alone. One bullish argument for India is that despite near record flows, equity market investments represent less than 5% of household savings while bank deposits and gold each represent 15% of savings. This may give rise to hopes that increasing allocations to equities could continue to propel the market for many years to come, but it also demonstrates the relative lack of comfort with equity investment compared to other assets. And while domestic investors may be less sensitive to valuation comparisons with other global equity markets, this doesn’t mean that valuation sensitivity is entirely absent. Given the importance of fixed income instruments in savings, a more relevant comparison may be between the equity earnings yield and interest rates. Equity valuations are elevated on this measure too, with the gap between the 10 year government bond yield and the index earnings yield (the inverse of the P/E ratio) close to 10 year lows. This should give domestic investors pause for thought as bond yields are likely to rise further as the Reserve Bank of India attempts to bring inflation back within its target range.

In conclusion, we do not dispute the well appreciated long term structural positives of the Indian market, and find its’ recent resilience understandable in the context of risks elsewhere in the asset class. Ultimately however, we believe these dynamics have pushed valuations for the market overall to levels which make attractive long term returns less likely, particularly in comparison to other Emerging Markets which are currently priced at historically low valuation levels. We therefore continue to approach the Indian market with caution, remaining underweight within Emerging Market portfolios and emphasizing investment in stocks with robust fundamentals that have not been caught up in excessive valuation optimism. Meanwhile, we monitor developments closely, remaining watchful for opportunities to invest confidently in India’s exciting long-term growth potential.

Past performance is not a guarantee of future results. An investment involves the risk of loss. The investment return and value of investments will fluctuate.

For investment professionals only.

Information and data is correct as at 30 September 2022. Neither MSCI nor any other party involved in or related to compiling, computing or creating the MSCI data makes any express or implied warranties or representations with respect to such data (or the results to be obtained by the use thereof), and all such parties hereby expressly disclaim all warranties of originality, accuracy, completeness, merchantability or fitness for a particular purpose with respect to any of such data. Without limiting any of the foregoing, in no event shall MSCI, any of its affiliates or any third party involved in or related to compiling, computing or creating the data have any liability for any direct, indirect, special, punitive, consequential or any other damages (including lost profits) even if notified of the possibility of such damages. No further distribution or dissemination of the MSCI data is permitted without MSCI’s express written consent.

All information is subject to change without notice. Views should not be considered a recommendation to buy, hold or sell any investment and should not be relied on as research or advice.

This material is for informational purposes only and is not an offer or solicitation with respect to any securities. Any offer of securities can only be made by written offering materials, which are available solely upon request, on an exclusively private basis and only to qualified financially sophisticated investors. The information was obtained from sources we believe to be reliable, but its accuracy is not guaranteed and it may be incomplete or condensed. It should not be assumed that investments made in the future will be profitable or will equal the performance of any security referenced in this paper.

Reading Time: 5 minutes The ongoing mini-crisis that erupted in the UK at the end of September underlines the broader systemic fragility, the challenges and risks of portfolio illiquidity and the very narrow execution space for policy­makers.

US Dollar Poised to Fall Sharply

Reading Time: 2 minutes One thing that prior episodes of dollar overvaluation have in common is that they did not last. In each case, the US dollar, as measured by its trade-weighted exchange rate against a basket of its peers, saw a massive depreciation over a multi-year period.

© 2022 Mondrian Investment Partners Limited is authorized and regulated by the Financial Conduct Authority – Firm Reference Number 149507.
All information is as of September 30, 2022 unless otherwise noted.